Skip to content
The second Aireborough Civic Society talk of 2022 takes place next Tuesday 26th April, 7.30pm at Rawdon Library.
Eric Jackson, J.P. will be giving a talk about the Suffragettes and the Achievement of Votes for Women in 1928.

Eric’s talk starts with the iconic death of Emily Wilding Davison under the hooves of the King’s horse at the 1913 Epsom Derby.  He will also cover the establishment of the first societies advocating women’s suffrage.

By chance the Local Elections are taking place just 9 days later on the 5th May, so this is an extremely topical talk!   Our next Community Meeting will take place on Tuesday 31st May when Local Issues will be discussed.  As in March we hope to invite a local councillor to that meeting. 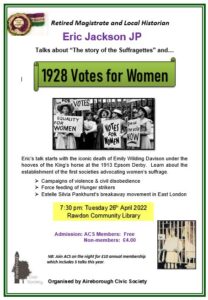 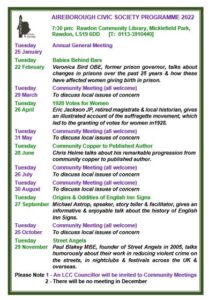 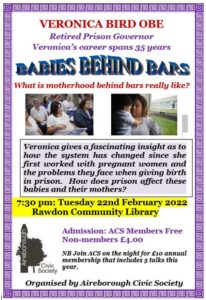 Metro has called the new routes ‘a compromise’.   Yeadon Centre will still be served but the 747 will no longer serve Kirk Lane, the A65 and Westfield, but will use Henshaw Lane.  The 737 will serve Kirk Lane, but miss out Queensway.  At a time when Leeds has a target to double bus passengers, taking services away from the 2 biggest housing estates in the area seems to be a serious mistake. Some people will have a much increased distance to walk.  Metro says that passengers from these estates will just have to walk another 10 minutes!   Not good if you have luggage for the airport, bags of shopping, are elderly, or it is dark or wet.   Not good if you work at the airport, travel to Bradford or Harrogate or Yeadon Centre.

We think these changes are ill-thought out, will inconvenience local people and lose passengers while chasing a vague aim of getting more passengers to use buses from Bradford to the Airport. There is already a perfectly good 30 minute service from Bradford Interchange using the 737 & 747.

What Are the Claimed Benefits?

The Airport say that a slightly shorter journey from Bradford on the 747 will attract bus passengers – but the journey only takes 30 mins now – and then you must wait at LBA for at least 2 hours for your flight.   How many people will now choose to use a bus if it is 5 mins quicker?   In any case most train users will use the 757 from Leeds. They have also failed to notice that the new 737 route will be less direct than now.   Most flights from LBA are very early in the morning or late in the day, so there won’t be any bus passengers for the airport for most of the day, when locals could be using these buses.

Bradford Council wants the bus to stop at Apperley Bridge Station, but that won’t attract any passengers as it is an hourly bus service.  We have not been told the reasons for this idea.   It is almost impossible to timetable an hourly service to connect with the train service to Leeds or Bradford – and it would actually take longer and cost much more than staying on the bus.

We think these changes make no sense, will lose passengers and are ill-thought out.    It is no surprise that fewer people are using our buses when such changes are made.  Unfortunately this means more cars, more congestion, slower journeys and more pollution.

Supposedly those going to the airport from Bradford and wanting to save 5 minutes journey time!   But not those using the 737!

Those catching a bus to Apperley Bridge Station and taking a train to Leeds or Bradford – even though it will take longer and cost more than using a bus for the whole journey!

The Changes Make No Sense

We have complained to Metro about the changes and also asked that they should be at least delayed because of the current Covid crisis with hardly any passengers using the airport.  We have received no response. Making these changes NOW seems inconsiderate and ridiculous.

It is also very disappointing that Leeds Bradford Airport have not considered the needs of local people, including their own employees when insisting on these changes. They claim to be good neighbours – not on this evidence!

Also worrying is that there are currently no timetables at bus stops, so how are passengers to know about the changes?

Another unhelpful change for those using public transport are current plans to remove all the bus stops in front of Leeds City Station so that those going to the Airport using the 757 Airport bus will have to walk to the Wellington Street bus stop – luggage and all!  What are Metro thinking of? 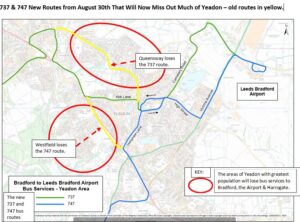 AIRPORT BUS SERVICES 737 & 747: Routes change this Sunday to miss out Queensway and Westfield Areas.
The new routes are on the map. Please make anyone you know who uses the 737 or 747 aware.

Metro has made the changes because the Airport wanted the 747 bus service to go on a more direct route to Bradford to save time – because they say more people will then use it.

Bradford Council want the 747 to call at Apperley Bridge Station so that airport users can catch it there. Aireborough Civic Society objected strongly to the changes. No-one was even consulted locally before these changes were decided. Metro say that bus users living on the Westfield & Queensway will have to walk an extra 10 minutes as part of their ‘compromise’. Not good if you have shopping, luggage or are elderly.

We don’t think there will be any time saving. We don’t think an hourly bus service to Apperley Bridge Station will connect to trains, so the journey time will be longer and more expensive. Therefore, we are sure these changes will lose passengers and encourage more car and taxi use – leading to more congestion for all. We also asked for a delay in the changes as very few passengers are using the Airport now – with no success. Further details in our Press Release.

We have reminded Metro that they need to put information about the changes at local bus stops – none are there yet. 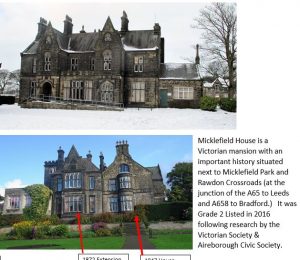 Micklefield House has a varied and interesting history.  According to English Heritage the first reference to Micklefield House was in 1616, but this building was replaced by a new house in 1662, and the house was rebuilt again in 1847, then extended in 1872. 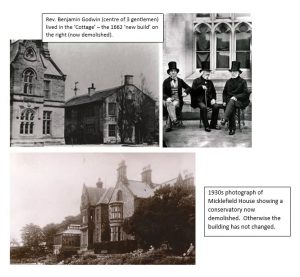 In Victorian times many wealthy Bradford textile manufacturers lived in Rawdon following the opening of a station at Apperley Bridge in 1846.   John Venimore Godwin, Mayor of Bradford

(1864-5) rented the house in the 1860s.  He was a successful Bradford stuff (mixed worsteds) merchant and keen early photographer and we have him to thank for a handful of evocative pictures of his family and home.  There must be others as he was a founder of the Bradford Photographic Society – we should very much like to have copies of any others that still exist.

The family of John Venimore Godwin at Micklefield House. On the left is John Arthur who went on to become the first Lord Mayor of Bradford in 1907.

John V’s father, Benjamin Godwin, lived in the 1662 house on the right in his retirement.  He was a Baptist Minister and important in the anti-slavery campaign of the 1830s that resulted in the Slavery Abolition Act of 1833.  He was also involved in the setting up of the Liberal Bradford Observer newspaper in 1834.

The old photographs are from the website of the Aireborough Historical Society. Link: 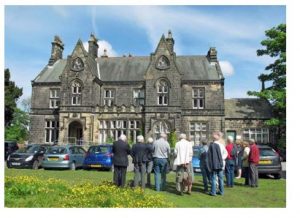 Since 1974 Micklefield House has been offices for various Leeds City Council departments – and provided local employment.  With the centralising of Leeds Council services at Merrion House it is now to be sold and will probably be converted into apartments.  This means that it could be empty and vulnerable to vandalism and theft whilst planning permission is obtained and a conversion can take place.  We are all aware of severe damage to important heritage buildings throughout Leeds when they have become empty, e.g. Chapel Allerton Hospital, Meanwood Hall, High Royds Hospital, Cookridge Hospital etc.  It is, unfortunately, a national problem that appears to be ignored at present. Aireborough Civic Society did oppose the sale, but is now working with councillors and  has met with officers to try and ensure that the building will be occupied at all times until work commences.

Update January 2020:  Leeds CC agreed to keep an office presence at Micklefield House when most departments had moved out and this was successful.   Unfortunately the Estates Department who were responsible for the building failed to take adequate security measures when the building became empty in November 2019, despite our warnings of the risk of vandalism. 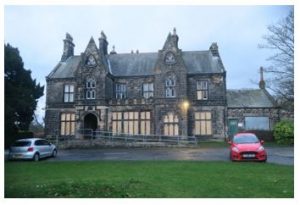 In December vandals broke 20 windows, gained access and smashed important, irreplaceable Stained Glass windows inside the house.   The house has now been boarded up and hopefully security will prevent further damage.

Timeline of History of Micklefield House

1863   Estate auctioned in lots by White.  Purchased by William Kutter of   Buckstone Cottage.

1860s – 1870 John Venimore Godwin, Mayor of Bradford lived there (before moving to and rebuilding Crowtrees).

1937  Headquarters of Aireborough U.D.C. following union with Guiseley and Yeadon.

1974 Became offices of Leeds City Council with breaking up of the former West Riding with Aireborough becoming part of Leeds Metropolitan District. 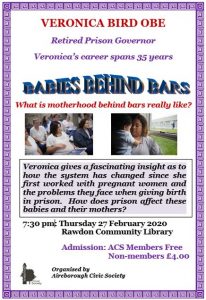 In 2020 we have 5 talks and 5 community meetings.  Find out more about how we can improve Aireborough  at our community meetings when we shall usually have a guest MP or councillor.     Our talks cover a variety of topics.   All are very welcome to both. 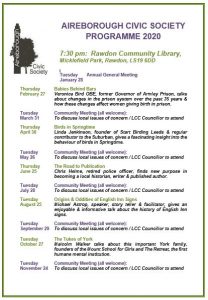 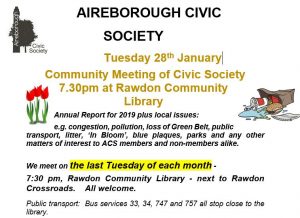